We are place makers

United in a passion for creating landmark communities where people can live, work and play.

Honored to be the designers, architects, planners and environmental experts helping create a new heart for the South Hills.

Brett grew up in Oakmont, Pennsylvania, and now resides in the South Hills. A self-proclaimed idealistic and persistent kid, Brett credits an array of mentors, especially his father, Jerry Malky, with helping instill in him a commitment to doing work he loves. A graduate of Haverford College and an MBA graduate of the University of Pittsburgh's Katz Graduate School of Business, Brett spent a year during college hitchhiking around the world, working odd jobs, thumbing for rides, jumping trains, boats and planes across England, France, Italy, Greece, Israel, Egypt, Thailand, and China.

Brett got his start in real estate with K.S. Sweet Associates, an investment and venture capital firm in New Jersey. The firm managed developed, financed and managed real estate development projects for some of the most prominent investors in the nation including Princeton University's Endowment Fund, Hewlett Packard, The Dorrance Family and Case, Pomeroy. There, Brett was one of the project managers for Princeton Forrestal Center, the largest mixed use PMUD Research Park (Planned Multi Use Development) in the world at the time in Princeton, NJ, supported design review and served as project manager for a mixed use community in East Granby, CT.

Prior to founding EQA, Brett created his own consulting firm, whose clients included IBACOS (Integrated Building & Construction Solutions), one of the nation's leading Research & Development firms in the homebuilding industry. He eventually joined IBACOS as a full time employee, and they later became an investor in EQA. While there, he led the manufacturer and builder programs and development of a Pilot Community program to showcase the best new ideas in housing on a community scale in conjunction with the U.S. Dept of Energy and Carrier, GE, Molex, Owens Corning and USG.

In 1998, Brett, along with several partners and investors, founded EQA Landmark Communities with a simple goal was to help create the best new communities in the nation, and one day, lead the creation of great communities. Armed with their passion and drive, EQA began consulting for large developers on some of the best new communities in the nation (Playa Vista, Civano) followed by supporting roles in other great communities (Summerset at Frick Park, Noisette, Venango Trails). Today, EQA is fulfilling their dream of creating Landmark Communities in which we are an equal partners (Edgewater, 151 First Side) and the leader and majority owner (Newbury). 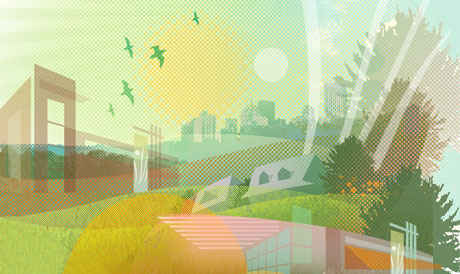 Eric Newhouse grew up near Harrisburg, PA and came to Pittsburgh to study architecture at Carnegie Mellon University. He enjoys the rolling hills and beautiful rivers of western Pennsylvania and thrives in Pittsburgh: a City of Neighborhoods nestled into the hills and valleys. A small town with big city cultural amenities and sporting events. For nearly ten years, Eric worked at Integrated Building & Construction Solutions (IBACOS), one of the nation's leading research and development firms in the homebuilding industry, where he led efforts to build high performance homes across the nation. From there, he moved to East Liberty Development, Inc., where he helped lead the rebirth of the East Liberty neighborhood. In 2006, Eric joined EQA as a project manager for large, mixed-use development projects like Newbury.

And, Newbury fulfills every aspect of this vision for unique community development and the sustainable reclamation of brownfield land. True to his passion for his projects, Eric, his wife and daughter are proud residents of Newbury.